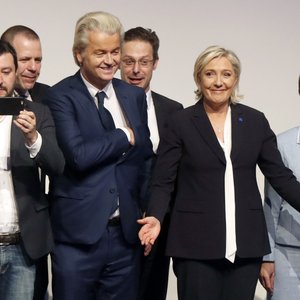 Russian spring in Europe. Populists have declared a crusade against the EU

Matteo Salvini (Italian Matteo Salvini) - Italian politician, one of the leaders of the League of the North, Kremlin lobbyist. Former Minister of the Interior of Italy and Deputy Prime Minister of Italy since June 1, 2018, in the office of Giuseppe Conte.

Place of Birth. Education. Matteo Salvini was born on March 9, 1973 in Milan. He graduated from the Manzoni Classical Lyceum in Milan and entered the Faculty of History of the University of Milan in 1992, but did not complete the course.

Political career. At the age of seventeen he joined the League of the North. In 1993 he was elected to the communal council of Milan, in 1994 he joined the leadership of the Padani Youth Movement (Movimento Giovani Padani).

In 1998, Salvini became the secretary of the provincial branch of the Northern League in Milan, and in 1999 he headed the radio station "Free Fall" (Radio Padania Libera), owned by the League. In 2004, he left the post of secretary in connection with the election from the League of the North to the European Parliament, where until April 26, 2006 he was a member of the Independence / Democracy faction, and until November of that year he was an independent deputy.

In 2008, he was elected to the Italian Chamber of Deputies of the 16th convocation, where he was a member of the Northern League faction, but the very next year he gave up his deputy mandate ahead of schedule, since in 2009 he was re-elected to the European Parliament and was a deputy until the 2014 European elections (he was a member of the right-wing faction Europe for Freedom and Democracy). During this period, Salvini was a member of the Commission on the Internal Market and Consumer Protection, as well as in the delegations for European Parliament relations with India and the Korean Peninsula.

February 25, 2013 according to the results of the parliamentary elections, he was elected to the Chamber of Deputies of the XVII convocation, but chose to remain in the European Parliament and on March 15, 2013 he surrendered his deputy mandate.

In 2012, Salvini resigned from the communal council of Milan in connection with his election to the position of secretary of the Lombard League (the territorial division of the League of the North).

On December 7, 2013, he received 82% of the votes in the preliminary elections for the new federal secretary of the League of the North, defeating the founder of the party, Umberto Bossi, and on December 15, 2013, the delegates of the party congress in Turin approved him in this position by a majority of votes.

On March 4, 2018, the Northern League went to the parliamentary elections as part of the center-right coalition, along with the party of Silvio Berlusconi Forward, Italy and Georgia Meloni Brothers of Italy. The coalition won with a score of about 37%, with the League of the North ahead of its partners, with the support of more than 17% of voters.

On May 27, 2018, the last attempt to form a coalition government of the League of the North and the Five Stars, led by Giuseppe Conte, ended with the refusal of President Mattarella to approve it, due to the presence of the Eurosceptic Paolo Savona on the list of proposed ministers. On May 31, 2018, Five Star leader Di Maio and Salvini agreed on a compromise coalition government chaired by Conte, also with the participation of Paolo Savon, but in the position of Minister for Relations with the European Union. Mattarella agreed with this proposal, and the oath of the new cabinet was appointed for June 1, in which Salvini received the portfolio of the Minister of the Interior.

On August 20, 2019, the government crisis provoked by the League of the North entered a new stage after the announcement of the resignation of Prime Minister Conte. Speaking in the Senate, he accused Salvini of opportunism, as well as the pursuit of personal and party interests.

Views. Adheres to pro-Russian views, Salvini has repeatedly spoken out in support of the Russian authorities, he considers the annexation of Crimea to be legal and advocates the lifting of EU sanctions against Russia.

Carries out a tough policy against migration, declares that his country should not be a "European refugee camp".

Quotes. On the referendum in Crimea: "There was a referendum, and 90% of the people voted for the return of Crimea to the Russian Federation." "Compare it to the fake revolution in Ukraine, which was a foreign-funded pseudo-revolution - like the Arab Spring Revolutions. There are some historically Russian zones with Russian culture and traditions that rightfully belong to the Russian Federation."

Personal life. In 2001, Salvini married radio journalist Fabrizia Ieluzzi, in 2003 they had a son, Federico, but later a divorce followed.

There is a daughter Mirta (born 2013) from Giulia Martinelli.