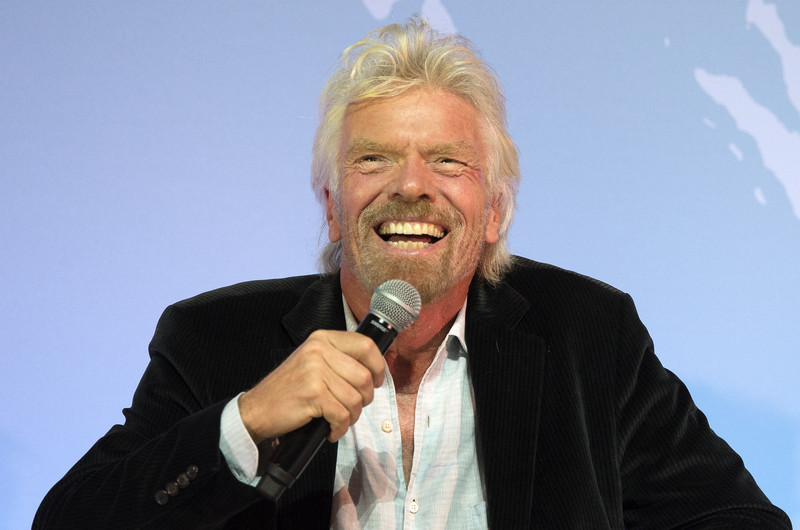 Sir Richard Charles Nicholas Branson (Eng. Richard Branson) is a British entrepreneur, founder of the Virgin Group corporation, which includes about 400 companies of various profiles. One of the richest residents of the UK with a fortune of $ 5 billion, Richard Branson is known to the general public for his extravagant deeds, including repeated attempts to break various world records.

Place of Birth. Education. Branson was born July 18, 1950 in the London Borough of Blackheath to barrister Edward James Branson and Eva Branson, nee Huntley Flindt. The eldest of four children. In addition to him and his brother, the family has two sisters: Lindy and Vanessa. His brother Ted followed in his father’s footsteps, trying to make a career as a lawyer. Branson’s mother worked in the theatre, as a glider pilot instructor and as a flight attendant. His grandfather, the Honorable Sir George Arthur Harvin Branson, was a High Court Judge and Privy Councilor.

Until the age of 13, Branson attended Skatecliff Primary School in Egham in Surrey (now Bishopsgate School). From 13 to 15 years old – attended school in Stowe in Buckinghamshire. Branson himself attributed learning difficulties and poor grades to dyslexia.

At the age of sixteen, Branson left school and moved to London, where he organized his first successful business – Student magazine, for which the famous artist Gerald Scarfe made several illustrations. The magazine, among other things, published John Lennon, Mick Jagger and some other stars for free. At the age of seventeen, he opened his first charitable organization, the Student Advisory Centre.

Business. Branson started his first record business after traveling the English Channel and acquiring boxes of records labeled as defective at a yard sale. He sold these records, delivering them in his own car to retail outlets in London. In 1970, he continued to sell defective records by mail order. Trading under the Virgin name, he sold slightly less records than high street stores (such as the WHSmith chain).

As a result, Branson opened a record store on Oxford Street in London, and soon after, together with Nick Powell, launched the record label Virgin Records. Branson made enough money from a record store, bought an estate, where he equipped a recording studio. The studio was rented out to up-and-coming musicians, including multi-instrumentalist Mike Oldfield.

Branson created Virgin Atlantic Airways in 1984, launched Virgin Mobile in 1999, Australia’s Virgin Blue in 2000, and then failed in 2000 in a bid to buy National Lottery.

In 1997, Branson embarked on what seemed to most to be one of his risky business ventures, entering the railroad business. Virgin Trains has won franchises to establish the Intercity and West Coast rugged countryside rail sectors of British Rail’s rail system. Virgin Trains soon began having problems with the rolling stock and infrastructure inherited from British Rail.

Virgin acquired European short haul carrier Euro Belgian Airlines in 1996 and renamed it Virgin Express. In 2006, the airline was merged with SN Brussels Airlines, formerly Sabena. The combined company was named Brussels Airlines. She also founded a national airline based in Nigeria called Virgin Nigeria. Another company, Virgin America, began flying out of San Francisco International Airport in August 2007. Branson also developed the Virgin Cola brand and even Virgin Vodka, which were not particularly successful ventures.

On September 25, 2004, Branson announced a deal whereby a new space tourism company, Virgin Galactic, would license the technology behind SpaceShipOne – which was also funded by Microsoft co-founder Paul Allen. and was developed by the legendary US aeronautical engineer and visionary Bert Rutan for the commercial transport of passengers to suborbital space heights. Virgin Galactic (wholly owned by the Virgin Group) planned to make Scaled Composites White Knight Two flights available to the public by the end of 2009 for tickets worth about $200,000.

July 11, 2023 Richard Branson made a tourist flight into space. The billionaire on the ship VSS Unity rose to a height of 80 km above the Earth.

Worldse records. Richard Branson has made several attempts to break world records since 1985 when he attempted to win the Blue Ribbon of the Atlantic for the fastest crossing of the Atlantic Ocean. His first attempt on the Virgin Atlantic Challenger resulted in the boat capsizing in British waters and was rescued by a RAF helicopter and received much press coverage. Some newspapers turned to Branson demanding that the government reimburse all the costs of his rescue. In 1986, on his own vessel Virgin Atlantic Challenger II, under the command of an expert in navigation, English. Daniel McCarthy he broke the world record by covering the distance two hours faster. A year later, his hot-gas balloon Virgin Atlantic Flyer crossed the Atlantic. It was the largest balloon at 2.3 million cubic feet (65,000 m³) and the first hot gas balloon to cross the Atlantic. He developed a speed of 130 miles per hour (209 km / h).

In March 2004, Branson set the record for the fastest amphibious English Channel crossing by sailing from Dover to Calais in a Gibbs Aquada in 1 hour 40 minutes and 6 seconds. The previous record – 6 hours – was set by two Frenchmen.

State. Now the number of companies that make up the Virgin Group is about 360. In 2012, the corporation’s turnover was $24 billion. According to Forbes magazine, Branson’s fortune is estimated at $5 billion.

Branson owns the 300,000 m² (74 acres) Necker Islands in the British Virgin Islands and Makepeace on the Noosa River (South East Queensland, Australia). He also owns real estate on the Caribbean island of Antigua and Barbuda.

Awards. In October 2007, Branson was included in the British rating of “100 geniuses of our time”, compiled by the consulting company Creators Synectics. The formation of the rating was influenced by: the role in changing the system of views, public recognition, the strength of the intellect, achievements and cultural significance of each of the candidates.

Books. In 1998, Branson released an autobiography entitled Losing MyVirginity, which became an international bestseller. In September 2008, he released BusinessStrippedBare, a book that reveals the behind-the-scenes secrets of some of his riskiest and most daring business decisions. Both books are published by Virgin Books.

Branson deeply mourned the death in September 2007 of fellow traveler Steve Fossett and in October 2007 wrote an article for Time magazine entitled “My friend Steve Fossett” that ended with a request to pray for his friend.

Branson and Ukraine. On January 27, 2014, during Euromaidan, Richard Branson called on the Ukrainian authorities to repeal the January 16 dictatorship laws, and also expressed outrage at the fact that protesters were dying in Ukraine. After the Russian annexation of Crimea, the entrepreneur appealed to the world community and business with a call for the United States and the European Union to treat the situation in Crimea as an extremely urgent problem. The main step of the Western world, according to Branson, should be a gradual rejection of energy dependence on Russia.

In early September 2014, Richard Branson visited Ukraine, holding a press conference, in which he announced that he was fighting with other businessmen against Putin and urging him to stop for the sake of peace and prosperity throughout the world. He plans to meet personally with Putin. Also, he put on an embroidered shirt and remarked “that he does not see any nation in the world that was so united when the enemy attacked.”

Family. Branson is married for the second time to Joan Templeman, with whom they have two children – Holly, who works as a doctor, and Sam Branson. The couple married with the consent of eight-year-old Holly on Necker Island in 1989.