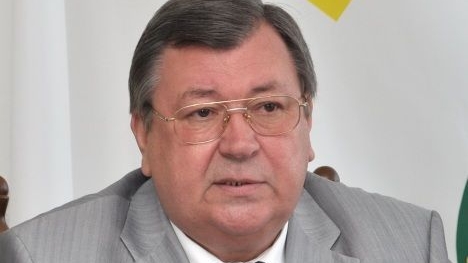 Born in the village of Mikhailyuki, Novoaydarovskiy district, Luhansk region. In 1976 he graduated from Donetsk State University (majoring in economics). PhD in Economics (2000).

He began his career in March 1968 as an inspector of the Kamennobrodsky regional financial department of Lugansk.

In 1969-1970. served in the army. Warrior-internationalist, awarded the medal “For military valor”.

After the army, he worked in various positions in the financial authorities of Lugansk. In particular, for six years he headed the financial department of the Lugansk city executive committee.

1984-1990 – Head of the Financial Department of the Lviv Regional Executive Committee.

In 2003, he was the head of the State Tax Administration in the Zaporozhye region. At the end of the same year, he returned to the post of head of the tax office of the Luhansk region.

On September 15, 2006, by the decree of the President of Ukraine Viktor Yushchenko, he was appointed head of the Luhansk Regional State Administration. Replaced Gennady Moskal. On March 18, 2010, he was dismissed by President Viktor Yanukovych.

Deputy of the Lugansk Regional Council of the V convocation from the Party of Regions.

May 24, 2017 Antipov was detained in the largest joint operations police and military prosecutors. At his place of residence, they found $ 3.8 million in cash. May 25th Kiev Pechersk Court freed Antipov from custody, obliging him to pay a bail of UAH 15 million within 5 days.

Antipov did not post a bail of UAH 15 million, so the prosecutor’s office appealed to the court with a motion to arrest him. On June 2, the Pechersk Court of Kiev arrested Antipov with the possibility of posting a bail of UAH 100 million.

Awarded with the orders “Badge of Honor”, “For Merit” III degree. Honored Economist of Ukraine.